The most complicated part of that set was the the train point part 73696c04.dat, which still needs improvement. At the time of creating it, Philo's fabulous LDRAW authoring tools didn't exist yet. I also carefully checked that the newly created 12V train track parts were properly integrated into BlueBrick, so you now can elegantly create a train track layout using that software, and then export to .ldr format, then do a POVRay render. 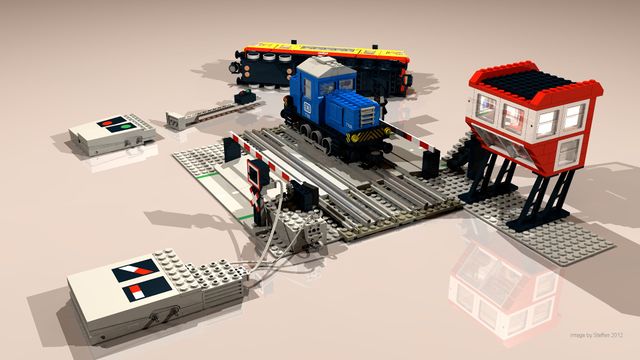 In the meantime, I've created some 400+ parts now. My favourite LEGO themes are the 12V trains, Fabuland, Classic Legoland City and Technic. Nowadays, I am just using LDView to export my LDRAW scenes to POVRay format, adding just some custom lighting setup.

I work as a software developer in the automotive industry, play the piano and am addicted to Lindy Hop, so we can meet at Herräng Dance Camp in Sweden.

My mail address for LDRAW purposes is muchelchupser(AT)web.de. (It is a word play of a German term for people living in Hamburg.)